The perfect place to visit this Halloween: Salem, Massachusetts, is 'Witch City' 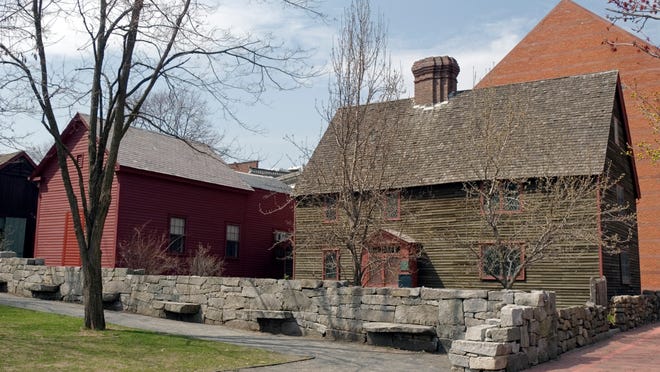 Salem, Massachusetts, has a fifth season in its calendar year: Halloween.

On the first of October, an appropriately gray Tuesday morning, I motored along I-395, watching the hues of autumn leaves progress to rich reds, yellows and oranges as I drove farther north to "Witch City."

People flock to take in the city that oozes Halloween from every crevice year-round with streets lined with shops and salons, including Moon Baby, The Coven's Cottage, Hex Old World Witchery, Vampfangs and Witch City Wicks, among others.

During the month of October, the city sees more than half a million visitors, Kate Fox, executive director of Destination Salem, told USA TODAY. She said that's about 30% of Salem's total annual tourists.

By Oct. 1, the town was fully decked: skeletons in windows, pumpkins everywhere, brooms attached to the backs of bicycles and a zombie playing saxophone for tips on the cobblestones.

A major reason Salem is considered a destination for Halloween lovers is also a dark part of its history: the Salem witch trials.

In 1692, in Colonial America's Salem Village, a group of young girls started having "fits and convulsions." Authorities declared it the work of the devil and determined the girls must have been bewitched.

Mass hysteria spread throughout the area.

About 150 people in Salem and surrounding towns were accused of witchcraft and thrown into jail.

After their trials, 20 people were executed in Salem for witchcraft. Nineteen were hanged and one was pressed to death, Jill Christiansen, assistant director of education at the Salem Witch Museum, told me.

I started with a zine from NowAge Travel titled "Walking the Witch Trials: A DIY Tour of Salem History."

From the guide, I selected a few key stops, including the Witch House and Salem Witch Museum.

The Witch House: The Witch House is the only building still standing in Salem that has a direct connection to the witch trials. One of the men who served as a judge in the trials, Jonathan Corwin, occupied the house at the time of the trials.

Guests to the Witch House can take a guided or individual tour. Ticket costs vary: $8.25 for adults, $6.25 for seniors and veterans and $4.25 for children. A guided tour costs an additional $2.

I took my own, and it was fairly quick. Visitors can get a glimpse into the lives of people from the era and learn more about the witch trials. I spent about a half-hour reading about the witch trials and perused rooms filled with artifacts of daily life in the late 17th century. The rooms were filled with furnishings, documents, tools, cookware and medicinal objects.

In Salem's high traffic season, Judy Marshall, a tour guide at the Witch House said the house gets thousands of visitors daily – the line goes around the block, and it's a two-hour wait to get in, particularly on the weekends.

Every October, Jordan said, the museum gets about 60,000 visitors. Daily, the museum runs tours every half-hour. Tickets are $13 for adults, $11.50 for seniors and $10 for children.

First, guests sit for a stage-set presentation about what happened during the witch trials. Then, Christiansen or another team member leads guests into a room featuring depictions of witches over the centuries, starting with a midwife from pre-Christian Europe to the stereotypical witch we think of today – with a pointy black hat – to Wiccans.

In 2022, Christiansen said, when the museum celebrates its 50th anniversary, the presentation will be updated to reflect evolution in research around the witch trials.

Other stops: There were many other places listed in the zine that I wanted to visit but ran out of time.

In the New England city, witchcraft is as alive and well today as many townspeople believed it to be centuries ago.

But that doesn't mean the devil dwells in Salem.

"Witches don’t worship the devil," said Melissa Nierman, founder of NowAge Travel. "People come to Salem and still come believing that, and our hope is they leave not believing that."

Modern witchcraft is tied to social consciousness and feminism, Nierman said. And it's individualized. Every witch can define for herself what being a witch means, Nierman and her wife, Erica Feldmann, owner of HausWitch: Home + Healing, explained.

"It's more about feeling empowered, wanting to change the world and connecting to your own intuition," Feldmann said.

There aren't prescribed practices; anyone who wants to hold the title of "witch," can, Feldmann said.

"If you talk to five different witches, they’re all going to tell you different things," Nierman said. "It's all very personal."

In Salem, there are plenty of shops for witches and tourists alike, each offering its own vibe, Nierman and Feldmann told me. At HausWitch, you can find locally made goods, tarot cards, artwork, crystals, books and more.

I drove home Tuesday evening after enjoying a lobster roll at Rockafellas.

Salem was a worthwhile day trip, but travelers may want to stay a bit longer, especially if they visit during spooky season.

During October, there are three to 40 Haunted Happenings events daily in addition to the attractions and historic sites. It goes beyond witches: There are ghost tours, the New England Pirate Museum, a wax museum and more.

I couldn't even make it through my witchy to-do list when I went, which is the perfect excuse to visit again soon.